If you are reading this article, I am sure that you are here to buy your favorite booster pack. But for all those who are new to this game, let me remind you about the same before we go further. So, what is Yu-Gi-Oh!? Well, in the simplest term, it is a trading card game. It is a game of strategy. Players create separate Decks of cards collected from Structure Decks and Booster Packs. “Konami” designed it. This collectible card game is based on the fictional game of Duel Monsters.

Moving further and talking about the game, there are many card types and zones. All of them are laid out in a predetermined manner starting with the main deck, extra Deck, graveyard, main monster zone, additional monster zone, spell & trap zone, field zone, pendulum scale, and banished card.

In this card game, one vs. one or two vs. two players draws cards from their respective decks. All the players take their turns and play into ‘the field.’ Each deck contains forty or sixty cards and players can play only with that. There is also an option of ‘Extra Deck’ that contains extra fifteen or fewer cards. Apart from these two, there is a ‘Side Deck.’ The players can swap cards between games using it. YuGiOh card players have 8000 life points at the beginning and are restricted to three of each card per Deck.

When Does a Player Lose?

The game ends when one of the two players has zero Life Points. If both players lost all their Life Points altogether, the game ends in a draw. Apart from that, a player loses when he/she required to draw a card but has no more cards left to bring in the Main Deck. Being a player, you can forfeit at any time. You can either win the cards, earn from them, or buy them online. Here is a list of the best YuGiOh booster box to buy. 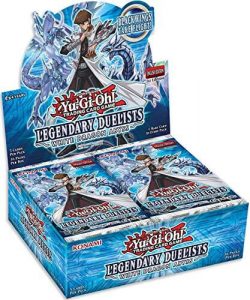 Legendary Duelists: White Dragon Abyss expands five previous iterations of the YuGiOh, manga, and animated series. There are many updates, such as GX, 5D’s, ZEXAL, and ARC-V! This booster deck provides popular strategies for famous monsters. Yes, about all the monsters you are thinking right now! 😉 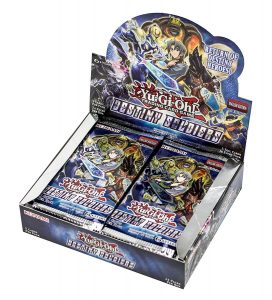 Aster Phoenix popular Destiny Hero cards are back in the market! Yay. The Destiny Soldiers booster set comes with 60 cards, in which you can get 40 Super Rares and 20 Secret Rares. This booster box uses an all-time favorite all-foil 4 plus 1 card configuration. You can also find similar types in The Secret Forces and the Hidden Arsenal boosters. 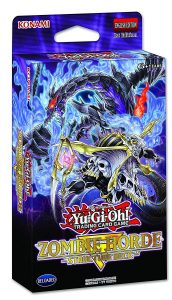 This YuGiOh Zombie Horde Structure Booster Deck includes two Ultra Rares, three Super Rares, thirty-seven standard cards. So, you can say that there are forty-one cards on the Main Deck. The kit also includes one extra deck card that makes a total of forty-two cards in this box. According to my opinion, this deal is a steal. Buy it now! 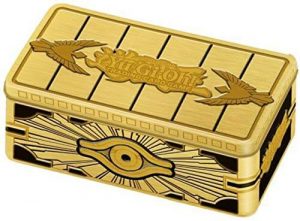 Spare one minute and just adore this beautiful Gold Sarcophagus Tin. It’s the latest design and launched recently on 30th August 2019. The best part of this product is that you can carry it anywhere without fearing of wear and tear of your valuable cards. So, if you are a rough user, don’t worry. Gold Sarcophagus Tin has got your back! 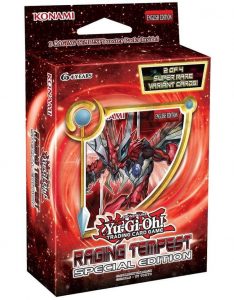 The kit of Raging Tempest Special Edition includes three booster packs in one. Apart from that, there are plus one of two foil versions preview cards launched in the year of 2017. If you are a Duelist, then you can get the help from the Raging Tempest. This booster pack contains many new and popular cards for a variety of themes.

That is it! These are the best YuGiOh booster box to buy. YuGiOh is one of the top-selling card games around the world. In 2009, its name appeared in the Guinness Book of World Record. The company sold 22 billion cards worldwide in one year. Crazy, isn’t it? Buy your important cards and win the game. Learn and earn. Best of luck!