Want to get your hands on life gain cards for MTG? We have gathered here the top 5 Magic: The Gathering life gain cards which are sure to give you an upper hand while playing your game. If your health is zero you would lose the game and in such times having extra lives in the form of these literally ‘life’ gaining cards is a huge advantage.

In the traditional commander format, you begin your game with 40 lives, whereas the standard format gives you 20 lives at the start of your game. However, there’s no harm if you have these MTG life gain cards in surplus. You can use these to gain more lives and climb the ladder of victory during your game as well as help you survive a burndown when you probably might be soon out of the game.

Without any further ado, let’s move on to the best life gain cards MTG. These cards listed below are easy to get your hands on and would definitely not punch a hole in your pocket.

The Sorin’s Vengeance is a single individual card from the MTG trading and collectible card game (CG/CCG). It is a nice one to get back in the game if you lack Creature cards. It would reduce ten lives of your target player and in return, you will gain that much. Get to know more about it with the details given below.

The ability as seen on the card is “Sorin’s Vengeance deals 10 damage to target player and you gain 10 life”. The flavor text on this one can be read as “Cherish these last moments. Though your miserable life has come to nothing, I have given it a magnificent end”. According to some, this quotation reflects his different perspective on immortality, long life, and patience.

2. Magic: The Gathering – Debt to The Deathless 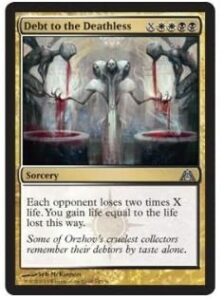 Debt to The Deathless is one such magic life gainer that would tear up your opponents and would definitely benefit you while you are about to lose the play. The artwork on this pasteboard gives you the impression of a metal album. Get to know more about this pumping life gainer:

The advantages as can be seen on this life gainer are “Each opponent loses two times X life. You gain life equal to the life lost this way”. The best part about this one is that the more mana you spend or the more number of players in the game, it will make the card stronger. The italics text that can be seen below the abilities text reads “Some of Orzhov’s cruelest collectors remember their debtors by taste alone”.

3. Magic: The Gathering – Elixir of Immortality 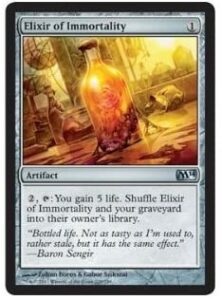 The Elixir of Immortality is one of the favorite cards for many. With this 3 mana pasteboard, you can scoop back most of your precious magics back into the library. Mill deck fans end up where they started and Zombies can’t rely on their graveyards. Also, Control decks generally end up wasting their counters when faced with this pasteboard. Want to know what more this one has to offer?

The card text shown is “2, ↷: You gain 5 life. Shuffle Elixir of Immortality and your graveyard into their owner’s library”. The quote on this one indicates that Baron’s back and he is back for good. It can be read as “Bottled life. Not as tasty as I’m used to, rather stale, but it has the same effect”. 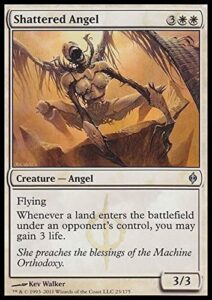 The Shattering Angel is the perfect addition to your angel deck. Using this pasteboard at the beginning ensures that you won’t have to worry about taking any hits. Also, this one makes the opponent use a land card which is quite frustrating at the beginning of the game. Let’s get to know more about this card:

The feature of this one is inscribed as “Flying Whenever a land enters the battlefield under an opponent’s control, you may gain 3 life” whereas, the flavor text can be read as “She preaches the blessings of the Machine Orthodoxy” which is literally an angelic expression.

The Pristine Talisman is a unique card that lets you increase your lives marginally. It is a good addition to your Artifacts deck. Not one of the most favorable one, but is definitely an advantage when you just want to survive a few hits. Read further to know more about this card:

The advantages as seen on this one are “↷: Add 1 to your mana pool. You gain 1 life”. It also has the quotation “Tools and artisans can be destroyed, but the act of creation is inviolate” by Elspeth Tirel.

Now that you know about these cards, get your hands on them and use them to defeat your opponent. Each of these has some unique features and advantages that are sure to grab your attention and help you during the game of Magic. Did you enjoy using any of these cards against your opponent? Tell us your favorite life gain card in the comments section. 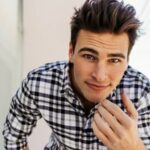